How to Calculate Your Future Wage Loss From the Railroad

If you've been hurt, you already know what money you're out of pocket.

You know those bills you couldn't pay. You probably know how to put together a wage loss claim for past wages.  (If not, here is a link to a wage loss calculator that takes the work out of coming up with your wage loss. It even allows you to include lost overtime.)

But if your injury is going to keep you out of work into the future, and you either want to settle your case now, or you’ll never return to work, then you have something called future wage loss.  Figuring out how much you will lose in the future can be a little more speculative, but if you take the right factors into consideration, you can have a solid basis to make a claim for the money that you’ll lose down the road.

In this blog I’ll explain how to calculate future wage loss with an example from a recent trial that I brought to verdict.

To get started you’ll need:

Important note: In many cases, railroad workers can file their own claims (more on that here) using the wage loss calculator that I reference. However, if you are at the point of calculating the loss of future wages, then more than likely your case is complex. To get the best possible outcome, you should be working with an experienced FELA attorney.

Let’s jump into the example of an injured railroad worker and see how future wage losses are derived.

First, you need to create a schedule of your hourly rate. 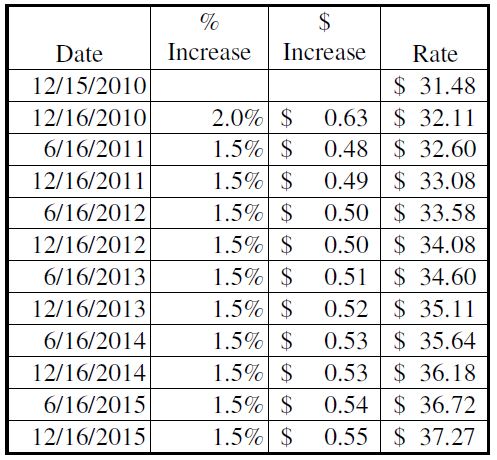 Here is a schedule based on the contract of a northeast commuter railroad. The contract had percentage increases at six-month intervals. Each of those then need to be factored in since they compound.

The contract increases end in 2015. However, most likely your claim will extend well beyond that. From that point forward you can use the percentage rate equal to the average of the past five years. Once you do this, you really just use the same wage calculator you did for your past lost wages, except you plug-in the revised hourly rate for the period in question.

Here is an example of an employee who could have worked until 2040.

You will note that I did not increase his hourly rate for the last 20 years. That was done strategically, considering how much of a wage loss claim I was asking the jury to consider. In a different situation, meaning one where I wasn't claiming a 20 year career, I would have included annual wage increases of approximately 3 percent. I also did not include overtime in the wage loss claim for the future because the employee was so junior that I didn’t have any record to base the OT claim on. These claims can become very speculative, so you need to be conservative in your estimates to maintain credibility.

Does this seem complicated or cumbersome?

Your attorney can walk you through the future wage loss calculations. They’re something that we in the business do on a regular basis.

Bottom line, if you’re looking at future wage loss, don’t go it along. This post is meant to give you the background knowledge of the calculations involved, so you can be informed about the process. I'm happy to answer any questions you might have about putting this type of claim together.