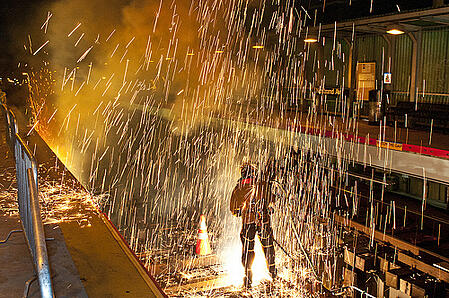 The National Transportation Safety Board (NTSB) has issued its wish list for passenger and worker safety. If you are a railroad that doesn’t want to invest in safety, it's more like a hit list.

Every year for the last 23 years the federal agency has highlighted what it sees as the trending problems in transportation, and every year the railroad safety problems and the industry’s failure to address them, makes the list. You can see the complete NTSB list here. This year, half of them involve railroad transportation.

Railroads have spent decades getting special exemptions and treatment by the federal government. Do you know of any other government-sanctioned monopolies? It is time they use some of those profits and plow them into safety, passenger and worker, and worry a little less about shareholder dividends and executive bonuses.

Here are the five critical areas in railroad safety that the NTSB has called the railroad industry to address.

1.  45 Years is Too Long: Get Control of Your Trains and Implement Positive Train Control

2.  Don’t Text While Driving Your Locomotive: Eliminate Distraction in Transportation

The same 2008 Chatsworth tragedy highlighted another of the NTSB’s Most Wanted: the effect of distraction on the safe operation of trains. The locomotive engineer was found to have been texting. The response needs to be both legal and social. The legal response needs to be in the form of penalties for distracted operation, whether rail or automobile. The FRA has already made personal electronic device use illegal during certain rail operations. But I have pictures of assistant superintendents using their cell phone while well within the envelope of active track, with no foul time in place. I admit to being part of the problem. I have certainly glanced at a text, or typed out a quick “Sitting in traffic, going to be about 30 minutes late.” I need to stop doing that. However, merely walking with a big stick won’t work. We also need to build a social infrastructure that dissuades distracted operations at all times, starting with new and existing drivers who are the agents of change, extending through their family and community support systems.

3.  Assume There Will Be Crashes: Strengthen Occupant Protection in Transportation

In 2012 there were more than 35,000 deaths due to transportation accidents. It turns out, that many of these deaths could have been avoided by better design of the transportation itself, as well as better containment of passengers. NTSB accident investigations found that current passenger railcar designs lack adequate crashworthiness protection for occupants and operators. Railcars often lack sidewall crush strength to limit intrusion into occupant seating areas. Likewise, passenger railcars usually are built with large side windows, which can become safety hazards when they break or pop-out during an overturn accident

Another critical element to occupant protection is preserving survivable space when a crash occurs. In 2011, the NTSB investigated a highway-railroad grade crossing collision in Miriam, NV. That raised awareness of the role crashworthiness plays in protecting occupants. The crash caused a loss of occupant survivable space, resulting in death and serious injury. Regulators and manufacturers can make sure that future crashes are more survivable by designing railcars with improved crashworthiness that minimizes intrusion into and loss of occupant survivable space and keep occupants within the seating compartment.

Likewise, the NTSB studied the evolution of crashworthiness standards for passenger railcars and identified several engineering shortcomings in the current standards and regulations. The NTSB has made safety recommendations to the FRA to revise and improve these sidewall crashworthiness regulations. Additional efforts are ongoing with the Federal Transit Authority to encourage improvements in the engineering standards for transit railcars.

4. Save the Most Lives: Improve Fire Safety in Transportation

After noting the 2011 Amtrak fire following a highway grade crossing collision, and the absence of fire doors between train cars, the NTSB specifically asked for better fire suppression and containment equipment and procedures. These alone can give workers, passengers and emergency personnel critical extra minutes to respond to fire conditions, whether flame or smoke. In fact, “Fire suppression holds the greatest potential for saving lives, reducing costs, and minimizing damage.

5.  It’s the People Who are Dangerous: Promote Operational Safety in Rail Mass Transit

Of the most direct personal relevance to commuter railroad workers, the NTSB has formally recognized failures in what it calls organizational safety culture at the railroads. Based on years of investigating mass transit accidents, the NTSB has found an increase in accidents stemming from human issues, ranging from lapses in train operator’s judgment, through slow decision-making to inspect or repair track, to poor leadership by senior management to prioritize safety over operational timeliness. Click here for more info if you're a railroad worker who has been hurt as a result of this kind of human error. On the horizon is an increasing role of the Federal Transit Administration in the railroad universe. The most recent transportation reauthorization bill (Moving Ahead for Progress in the 21st Century or MAP-21) gives the FTA critical authority to set and enforce new safety standards and conduct investigations. Among those areas that the NTSB asks the FTA to consider are the elements of safety culture, crew resource management, fatigue risk management, and technology. According to the NTSB, “Identifying and implementing these will be key to saving lives and preventing injuries.”

In short, the government has done the work of identifying the problems and establishing the fixes. Now it is incumbent on the railroads to follow through. Take charge, prove that passengers and workers are more important than profits. Do what the NTSB has spent over 20 years pleading with you to do, because it lacks the power to order you to do it.
Photo by Patrick Casin/MTA Photos