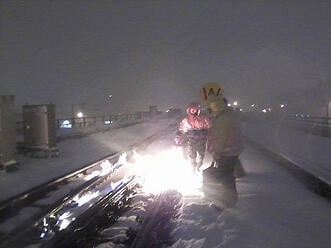 I came to think about this when I read An Open Letter to Passengers, the latest post from the blog DERAILED by Bobby McDonough conductor at Metro North Railroad.

McDonough’s post, and the comments that follow, reveal just how much frustration there is both inside and outside the railroad. My thought is that by exchanging a little more, even if you call it venting, there is actually some enlightenment. Frankly, limiting communication merely serves to further insulate everyone, creating the type of operational culture problems that the NTSB recently included on its Top Ten Most Wanted list. Lack of communication within the railroad is downright dangerous.

They say the foundation of every great railroad starts at the track bed, and ours has fallen into disrepair. Some years back, someone thought it would be a great idea to replace wooden railroad ties, which had been in place since the Lincoln Administration, with newfangled concrete ties. The idea was that concrete would last forever and would be virtually maintenance free. Well, as it turns out, forever meant 10 years. Without proper drainage concrete ties dissolve like Alka Seltzer tablets in a 10 ounce glass of water, and before you can say “plop, plop, fizz, fizz” the concrete melted into mud holes. Soon the ride into Grand Central became more frightening than “Mr. Toad’s Wild Ride”...and this is the basis of our current problems.

So as you see that track worker out your window, accept he might be as frustrated at being there as you are at having to move slowly through his section of track. No one gets satisfaction redoing someone else’s work.

At every level, safety is about communication. Whether it is electronic communication, written communication or the most basic, human communication, both sides to any issue need to hear and understand each other to get to a proper, and safe, conclusion. Railroad or not, commuter or freight, CSX, Norfolk Southern, BNSF, LIRR, Metro North, NJ Transit, Union Pacific, Amtrak. They all share tracks and they all deal with daily challenges.

Here’s McDonough perspective on the communication problem with the railroad:

I know this has always been a big point of contention, but your conductor can only inform you if he/she has been informed…and with the advent of Twitter and social media, the riding public is way ahead of us. For instance, I learned about the derailment in Bridgeport from a passenger a good five minutes before I heard about it on the railroad radio. But communication is a two way street...and sometimes you folks just don’t listen.

Besides a breakdown in communication, there are cracked rails, static-filled radios, burned out signal bulbs, short circuiting catenary, slippery track, flat wheels, broken shop tools, out-of-date tanker cars. Most of us try to get on a train or ship something by rail without thinking about all that goes on behind the scenes. Maybe a little more understanding would go a long way, in both directions.

I sit in an odd spot, I both ride the trains and know the people that make it possible for my train to get me where I am going. The passengers feel jipped and the workers feel under-appreciated. A little more discussion would go a very long way.

LIRR crews worked to keep signals and switches operational during the major snowstorm that hit the region on February 8-9 2013. This photo is from Hicksville.