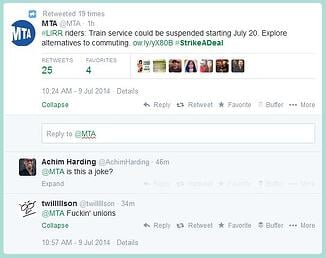 I'm not a member of a railroad union but I represent many of these men and women in matters outside negotiations, like when they get hurt on the job. I've worked closely with these people and I can tell the public that what they are seeing in the press, on social media and from the MTA podium is not the whole story.

Here's an excerpt from my post about the failed negotiations from Tuesday night. I hope it will give riders some insight into the MTAs motive for proceeding toward a strike. A strike that will hurt most the commuters the LIRR and the MTA is intended to serve.

After not having a real wage increase since 1998, when taking inflation into account, the unions sought one years ago. The MTA refused and then the company and the unions went through PEB 244, at the request of the LIRR. The LIRR told that board of three independent federal mediators that they shouldn’t have to pay for both substantive and financial reasons. For days they presented comprehensive explanations of their financial picture. That fair and impartial board determined what was reasonable based on the LIRR’s presentation. The railroad has never claimed they were not allowed to present everything they wanted to. After the board issued their recommendation, the railroad said, “not good enough. We refuse.” They still didn’t want to eat their vegetables before having dessert.

So like a tolerant parent, the federal government sat through PEB 245, where the LIRR presented nothing new, just the same arguments with a retread. The unions said they are willing to accept the federal recommendations. The railroad said they couldn’t pay what the federal board recommended. The same argument they made in PEB 244, but now to three different federal mediators. The outcome? The second board said again that the recommendation was reasonable.

Now we are literally days away from a strike by 5,400 union workers and the MTA public relations machine is in everyone’s face daily saying they are ready to talk when the union is ready to compromise. No mention of the fact that the unions did compromise and agreed to abide by the federal recommendations. It is being spun as if this dispute is of the unions’ making.

To the public, being misled by the MTA PR machine, I say:

Please remember where this whole dispute started and don’t blame the workers who are asking for a raise when they haven’t had a real one since 1998. Don’t blame the workers for doing what every person would demand in their own right if in the same position. Instead, look at the railroad and its stomping of feet and blinders and ask where their credibility is in light of the facts.