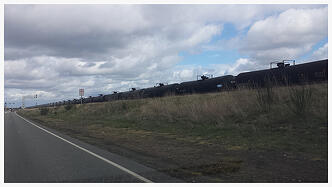 Though the fervor of questions rises, it has come to light that those same federal regulators are left in the dark as to what is on the tracks at any given time. First responders and community officials are no help, since apart from getting a list of the top 25 hazardous materials that move through their communities, they are kept outside the loop. Because of security concerns, local officials can’t make the top 25 lists public. Railroads keep a list internally, but those records also are not public.

The Association of American Railroads has started a preemptive woe-is-me defense to the inevitable accidents to come, saying “The shippers own the cars and the materials and are responsible for safe packaging and labeling, but we’re the ones liable in case of an accident”.

But who makes money on every mile of every tank car that comes rolling down the track? The railroads. So recently, the AAR proposed tighter safety regulations relating to tank cars carrying combustible liquids. But where were they for the last two decades? This is hardly a new issue.

Twenty years ago the MacNeil/Lehrer News Hour did a piece on this precise point. What was it that brought the railroads into their new "proactive" stance? Derailments. So now the railroad is scrambling to claim moral high ground. They have to convince the nation that they are doing everything possible to improve their safety.

According to rail industry officials, U.S. freight railroads are estimated to have carried more than 400,000 carloads of crude oil in 2013 (roughly equivalent to 280 million barrels), compared to 9,500 carloads in 2008.

As much as 90 percent of the North Dakota's Bakken crude will move by freight rail in 2014, more than the Keystone XL pipeline will transport.

To be sure, oil industry officials are lagging on the issue too, having reached no specific decisions, merely stating “Our mitigation efforts are looking at topics like tank car design and crude oil testing and classification".

States can play an important part in the regulation of CBR.

But if the railroads refused to let the unsafe tanker cars travel on their tracks, the companies would comply. With CBR shipments on the rise, track maintenance needs to also be on the rise, but tanker car replacements should be at the forefront.